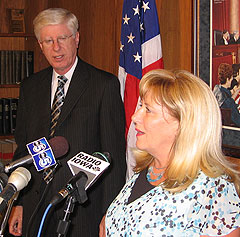 Iowa Attorney General Tom Miller is warning Iowans about a scam involving callers claiming to be from a utility company.

Miller says the caller states that the customer is behind on their utility bill and needs to make an immediate payment.

The scam is an attempt to obtain the person’s credit card information. Miller says people may fall for the scam simply because they are not aware of the status of their bill and fear losing the utility service.

Elaine Deal of Des Moines received such a call from an individual claiming to be with “MidAmerican.”  Deal says despite several questionable statements by the caller, she felt pressured to keep her power on in her home. “Rather than following my red flag results and thoughts, I decided I need to get this paid. I want this out of my mind, because I’m leaving town,” Deal said.

Fortunately, after giving her credit card information, Deal realized it was scam. She immediately called MidAmerican Energy to make sure no one had called her, canceled her credit card and filed a report with police.

Miller believes there are many more cases that go unreported. “We don’t think it’s an epidemic, but we do think it’s too common of an occurrence,” Miller said. Deal says, despite the embarrassment of almost being robbed of her credit card information, she chose to speak to the media about her experience. She hopes it will prevent others from becoming a victim of the scam.

“All I can say is, follow your gut. If you have all these red flags popping up, then listen to them,” Deal said. Miller says his office believes the calls are coming from out of state, and perhaps overseas or Canada.

One Iowa consumer’s card number was used in a restaurant in New York short after it was obtained through one of the calls. Miller says some consumers have reported their caller I.D. system even registered that the call was coming from the utility company. He says caller I.D. systems can be tampered with and falsified.