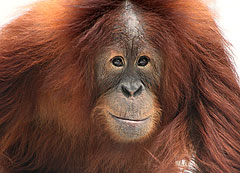 A child actor from California and his mother have moved to Des Moines, and four of their friends are set to follow.

But they aren’t the normal residents sought for the state. The Great Ape Trust of Iowa has arranged to take ownership of eight orangutans from the Steve Martin Working Wildlife Company.

The director of the Great Ape orangutan research center, Rob Shumaker, says all of the orangutans used to work in the entertainment industry. Schumaker says he cannot underestimate how important the agreement will be for the future of the research programs at Great Ape Trust as he says it confirms their national and international standing as a research institution.

One of the orangutans, 3-year-old Rocky has appeared recently in the Capital One credit card commercials, and is already in Des Moines with his 19-year-old mother Katy. Schumaker says adding the orangutans to the three already at the facility in Des Moines gives them a larger number of apes — and a better research situation.

Shumaker says this agreement and what’s going to come of it "is absolutely one of the most important events that I’ve been associated with in my 25 years of working with organgutans." Shumaker says a larger pool of orangutans for research gives them a better understanding of the animal and increases their efforts to preserve the species. 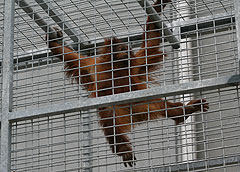 Shumaker says studies have shown that removing the orangutans from the entertainment industry is important in improving public knowledge and understanding of the animals.

Shumaker says Rocky and Katy have adapted well since arriving in Des Moines on July 12th. Shumaker says they will move the other apes in groups of three and really only have one concern about the move. He says one of the orangutans is in its late 30’s and he says this is a big change for her and will be very stressful, even though the overall change is positive for her.

You may notice Rocky in the Capital One commerical wearing a tiara. He also appeared in Elle magazine;s July 2007 music edition. For more information on the orangutans, see the Great Ape Trust of Iowa’s website .

(photos on this page courtesy of the Great Ape Trust)