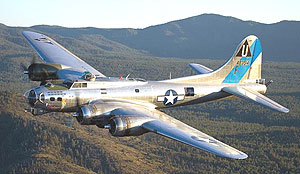 An extremely rare World War Two-era bomber is flying over Ames today and will be making several stops in Iowa over the next few weeks.

The B-17 Flying Fortress, known as The Sentimental Journey, is among only ten such aircraft still flying.

Crew Chief Russ Kozimor says it costs about a million dollars a year to keep the historic plane soaring. Every 25 flight hours, one of the four engines needs to be run through a rigorous inspection, there’s also a full annual inspection, and all throughout the tour there’s constant maintenance.

Kozimor says it takes "a lot of T-L-C," or tender loving care, to keep the B-17 in the air.  The Sentimental Journey is owned and preserved by the Arizona Wing of the Commemorative Air Force.

Kozimor is one of four crew members and rides cost $425 per person, six people at a time. He says it’s a $5 donation for tours of the plane while on the ground, which helps fund the tour.

"Normally, we do about 30 to 35 cities a year and we’re going to bump that up a little bit. By the end of the year, we spend about every penny we make, but we keep the plane in really good flying condition," he says. The big aluminum bomber draws large crowds wherever it goes, Kozimor says, including plenty of old gentlemen who flew aboard them in combat more than 60 years ago.

"Their stories are really fantastic, just to listen to what they went through. A lot of memories come back, a lot of tears and pretty good memories though," he says. A special ceremony was conducted in Kansas earlier this month, where the ashes of a World War Two veteran were dropped from the bomber over an airfield.

The B-17 is arriving in Ames today and will be there through Sunday. On Monday, The Sentimental Journey heads for Mason City, with more stops planned over the coming weeks in Fort Dodge, Waterloo and Burlington. For more details, visit the website of the Arizona Wing of the Commemorative Air Force .