You are here: Home / Agriculture / Sweet corn in high demand after later arrival

Fans of Iowa grown sweet corn are getting their fill after waiting a little bit longer than usual this summer. Paulette Bandwk of Granger has been selling sweet corn at a produce stand in West Des Moines for a little more than two weeks.

“We were two weeks behind. We always usually have sweet corn the week before the fourth of July,” Bandwk said. Most sweet corn growers in the state were forced to plant the crop later than usual this year because of cool, wet weather.

Now, everyday, Bandwk drives a truckload of sweet corn, or up to 180 dozen ears, to her stand – located across the street from a Wal-Mart. She starts selling at 6:30 in the morning and is usually sold out by mid-afternoon.”There’s only been three days that I’ve had to stay until 6:30 p.m.,” Bandwk said. 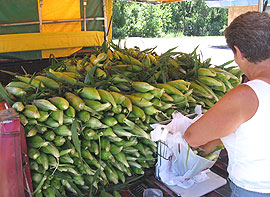 Scott Burk is selling sweet corn grown in Adel at another produce stand in Des Moines. He opened the stand early this month before he had sweet corn – and wasn’t getting much business.

“When I don’t have sweet corn, I really shouldn’t even be here,” Burk said. Both Burk and Bandwk are selling their sweet corn for $6 a dozen.