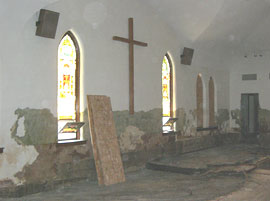 There’s been much in the news about the 4,000 homes flooded in Cedar Rapids last month, but 30 churches were also lost there.

Built in 1904, Salem United Methodist, near Cedar Rapids’ downtown, had 11 feet of riverwater inside, reaching the cross on the sanctuary wall.

Frank Conrad has been a member 46 years and says, "I’ve just now screwed up enough courage to go in and take a serious look around and it’s just shattering, remembering what it was like." The church is being stripped to its wood floors and brick walls; its beautiful stained glass, boarded over. Some pews were found in a bank building blocks away. All that remains in the main worship hall is a lone pulpit.

Dick Talbott, a lifelong member in his 80s, doesn’t know yet if they’ll hold services here ever again: "It’s estimated the cost to rehabilitate it back to what it was would be about 60-dollars a square foot, so you’re pushing a million dollars."

Talbott says one bright spot is the flood of volunteers in the church from across Iowa and the U.S., helping with the difficult task of demoliton and rebuilding. Conrad agrees, saying the generous outpouring of thousands of labor hours from volunteers from all over the nation has been a huge salvation.

"It’s just heartwarming and astonishing and any kind of word you want to use to describe it," Conrad says. "We feel blessed to have this many people come and help us." The church is welcoming volunteer work teams from as nearby as Davenport and Des Moines from as far away as Louisiana and Texas. He says Cedar Rapids, like New Orleans and any other town hit by a major disaster, will recover, but it’ll never be the same or "back to normal."

"There’s gonna’ be no normal," Conrad says. "Four-thousand homes have been destroyed or partially-destroyed. This city, in my view, is still in a state of shock. I don’t think people even now who are making decisions locally or statewide or even on a national level, really realize the impact of what’s happened here." Damage estimates for Cedar Rapids, Iowa’s second largest city, are expected to exceed one-billion dollars.