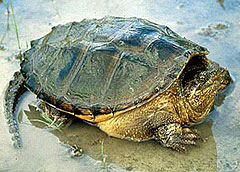 Two southeast Iowa men have been charged with turtle poaching. Authorities got a tip on the state’s "Turn in Poachers" hotline, so conservation officers staged a stake-out in the Tama Bottoms area north of Burlington on July 9th.

Iowa Department of Natural Resources Conservation Officer Joe Fourdyce says the illegal traps were set in an area near the Mississippi River. "The reason the traps were illegal is because they didn’t have the required…escape hole and they weren’t tagged in any way with a commercial tag or a name tag," Fourdyce says.

It’s legal to trap for turtles in Iowa, but officials say 36-year-old Mike Kerr of Mount Pleasant and 38-year-old Jack Schafer of Fairfield didn’t have the proper commercial licenses. The two men face a series of charges ranging from using an illegal method to "take" turtles to illegal possession of a turtle.

They face almost $2,300 in fines. Fourdyce says there’s been an increase in the number of Iowans who’re asking for licenses so they can trap legally turtles. "It’s fairly lucrative. You can make some pretty good money off of it," Fourdyce says. "I think female snapping turtles and soft-shell turtles bring about $1.50 a pound and the males will bring about $1 a pound."

The average turtle weighs about nine pounds. Fourdyce saw the two men check nine traps and round up 30 turtles — at an estimated value of at least $270. The turtles aren’t sold for their meat. "They go to a breeder who breeds them out," Fourdyce says. "The eggs will be put in an incubator and hatched and then the small turtles get sent over to China."

Kerr and Schafer, the men caught in the turtle trap sting, are to appear in court on August 12th.