You are here: Home / Fires/Accidents/Disasters / Volunteers are at the heart of Iowa’s flood recovery 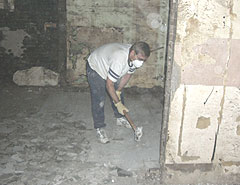 Volunteers from all across the state are trooping into Iowa communities to help rebuild homes and hearts after June’s devastating floods.

In a dank Cedar Rapids basement, Pastor Donna Hughes-Hargraves of Eldridge United Methodist Church is knocking down drywall covered in black mold. She explains her simple motivations for leading several of her congregation’s members into the smelly, dark abyss to toil with heavy hammers and shovels for hours on end.

"As a church, this is a practical way for us to do missions instead of just giving money, which is what we often do. We were here a week and a half ago with a smaller group and then we had folks sign up for today and our hope is to go to Oakville as well and be the hands and feet of Jesus and do something practical with our faith," Hughes-Hargraves says.

Homes and businesses are being stripped to their brick walls, concrete floors and wooden studs so they can be disinfected, then rebuilt. While small in stature, the eastern Iowa pastor demonstrated that she could do serious damage with a sledge hammer.

"Some of us have been in a small room whacking the snot out of the walls," Hughes-Hargraves laughs. "We’ve been taking down the plaster and all the chicken wire and pulling wires down. Some people have been cleaning the floors, sweeping, taking up tile, so a lot of just physical banging stuff." 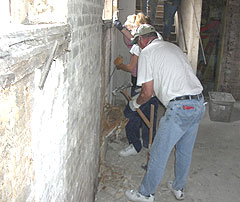 Helping her, with crowbar in hand, is Megan Hart who lives in Iowa City for the summer but is a student at the University of Northern Iowa, majoring in biology. Hart says, "I’ve seen a lot of stuff growing that I can identify. I can tell you all the genuses and species of the molds and stuff down there."

Susan Bunch, from the eastern Iowa town of Long Grove, is becoming well-versed in home construction and destruction, saying: "I’m learning that I have muscles that I didn’t know I had and I think I’m probably going to discover some more tomorrow when I wake up." All three women are volunteering with church teams, some just for a weekend, others for a full week of hard and hot -yet rewarding- work.

Bunch is an elementary school librarian, so she’s out of her element, hauling heavy tubs of flood-damaged drywall to the curb. Bunch says, "It’s good therapy and even though it’s a little piece, anything I do is something that somebody else doesn’t have to do."

The Cedar Rapids neighborhood where she’s volunteering contains a variety of businesses, single-family homes -including a few grand Victorians- and century-old churches, most of which were inundated by 12-foot deep floodwaters. Bunch says she understands why it’s hard for some of the locals to do this difficult grunt work, yet she’s able to wade right in.

"Having not seen it before," Bunch says,"I think it’s easier to come and do what I need to do and stay focused on that since I didn’t see what it looked like before all of the devastation." Nine of ten homes being rebuilt in Mississippi after Hurricane Katrina’s 2005 hit are going up as the result of volunteers from religious organizations.

While Iowa officials haven’t compiled that sort of figure yet, it’s already clear the hundreds of church volunteers fanned out across Iowa’s flood-damaged communities are making a significant impact.

Mounds of work remain though. One volunteer says it may be ten years before Cedar Rapids, and many other Iowa towns, are back to near-normal, and even then, he says, there will be permanent scars to communities everywhere.