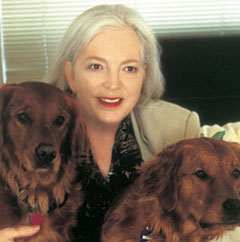 After reading “The Wizard of Oz” as a second-grader, best-selling author J.A. Jance says she knew she wanted to be a writer, but it took her a while to answer the calling.

Jance is doing a book-signing in Omaha/Council Bluffs tonight to promote her latest thriller about a woman sheriff.

Jance is a South Dakota native. Jance says, “We moved to Arizona for my father’s health in 1948 when I was four but I think one of the things about my books is that my characters have really good, solid Midwestern values and I think that’s reflected in all of the books I write.”

Jance worked as a teacher, a librarian and a life insurance saleswoman before finally deciding to pursue her dream as a writer when she reached her late 30s, first getting published in 1982. Now in her mid-60s, she says her career as a novelist is a “miracle” because she hit roadblocks early on — but ultimately wasn’t deterred.

“I wasn’t allowed in the creative writing program at the University of Arizona in 1964 because, as the professor told me, I was a girl,” Jance says. “That’s why, in my first thriller, “Hour of the Hunter,” the crazed killer turns out to be a former professor of creative writing.”

Jance enjoys writing and says, “I love it enough, it doesn’t seem like work most of the time.” Jance has created heroines in three series of books. Her latest novel, “Damage Control,” follows the exploits of Sheriff Joanna Brady and is Jance’s 39th book. She says number-40 is already written and number-41 is most of the way done.

“It takes about six months to write a book and then another six months for editing process,” Jance says. “I may be writing one book, editing a second and then promoting a third, but I don’t work on writing more than one book at a time. That would drive me nuts.” Jance is to appear at The Bookworm in Omaha tonight.