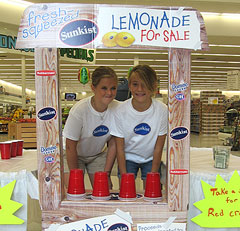 Dozens of kids across Iowa are running lemonade stands this summer to raise money for charities. Eleven year old Mara Arnold and her cousin Kayla, both of Norwalk, set up a lemonade stand Tuesday inside a Des Moines area Hy-Vee store.

The girls collected $248 in just a few hours. Mara’s mother, Sara, says the girls are learning much more than how to run a business. This is the second year they’ve run a stand and donated the money to a good cause.

"Last year, she donated her lemonade stand money to the troops, so they could buy phone cards to call home," Sara said. "This year, we saw that the Red Cross was getting a little low on funding for flood victims, so that’s why we chose the Red Cross." She adds it’s a great way to teach her daughter about helping others and giving back to the community.

The Arnolds are just one of 108 Iowa families involved with Sunkist’s "Take a Stand Program." Other Iowa kids are selling lemonade and donating the proceeds to animal shelters, the Salvation Army or other charities.