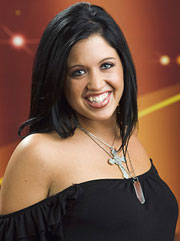 A northwest Iowa woman is one of three finalists for the title of " Nashville Star ." The program’s finale airs Monday at 8 p.m. on NBC.

During a recent interview on KICD in Spencer, 21-old Shawn Mayer from May City, Iowa — population 45 – talked moving to Nashville last October.

Mayer has settled in Madison, Tennessee — a Nashville suburb — but it wasn’t exactly smooth sailing when she first got to Nashville.  "I had a place lined up. It fell through. I slept in my car for a couple of days, then I soon found a place to rent and I rented a room and then that didn’t work out," she said. "(I) slept on a couch for four months (and) just finally got my own place."

Mayer eventually got jobs performing at the Nashville airport and the Nashville Palace, a big bar just across the street from the Opryland Hotel, but her first big break in Nashville was at Tootsie’s Orchid Lounge.

"Tootsie’s was very good. They gave me shows. I started off with only about two shows a week and playing for tips — we don’t get a base pay; we get nothing — so hopefully you have a good crowd, but since I’d just moved there, they didn’t give me the good shifts," she said.

"So I had like the day shift when not very many people came so I’d walk home with maybe $30, pay $15 for parking, maybe have $15 to put gas in my car and so I’d actually be in the hole by the time I got done with my shows and then finally they started giving me a little bit more so at least I could eat."

This past March, Mayer was among the throng in Nashville who auditioned for the TV show. "I was doing six shows a week, at least, if not double and triple shifts and one of my friends happened to be in town and called me up and said, ‘Did you know Nashville Star’s in town?’ and I said, ‘Well, I’d heard about it, but I can’t afford to take off work. I need the tips from my shows to pay for rent,’" she says. "And he’s like, ‘Well, take off from work just an hour early and wait in line with me,’ and so I did."

Mayer said she struggled at the beginning of the show. "I was so self-conscious to the point where it was very, very harmful to my career, to the point where I couldn’t even look at myself in the mirror in the morning not because I didn’t like who I was," she said. "It was just that I didn’t ever like the way I looked. I never thought I sounded good. I always compared myself to the other contestants."

Having "Nashville Star" viewers vote for her, week after week, seems to have cured Mayer of her self-doubt. "As the weeks continued on, like, I couldn’t say thank you enough to the people who voted for me," she said on KICD. "…Yeah, they’re keeping me on the show. I thank them for that, but you know what? What their votes are truly doing is every week I hear my name called, knowing that people voted for me gives me that much more hope that they see something that people see that they believe in."

The winner of "Nashville Star" gets a recording contract and a chance to perform at the Summer Olympic Games.