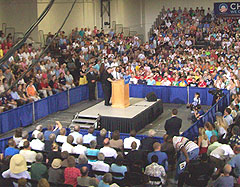 During a rally with supporters in Cedar Rapids, Democratic presidential candidate Barack Obama ridiculed an ad being run by his opponent, John McCain.

The crowd responded: "No."

Obama said he wasn’t interested in getting into a "tit for tat" with McCain, adding he was disappointed McCain had "fallen back into the predictable political attacks" and "demonstrably false statements."

McCain said during an appearance in Wisconsin today that he’s "proud" of the commercial. A campaign spokeswoman based in Des Moines says the ad "uses humor and a tough stance to celebrate Obama being a celebrity," adding that "Americans are beginning to really question whether being famous makes him a credible leader who is ready to serve as commander in chief."