You are here: Home / Fires/Accidents/Disasters / Obama talks with flood victims in Cedar Rapids 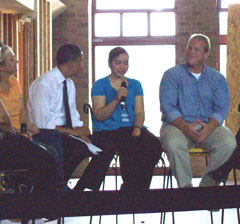 Democratic presidential candidate Barack Obama met with a handful of Cedar Rapids area flood victims this morning . The group gathered in the Czech Museum which was inundated when the Cedar River flooded in June.

“There are so many uncertainties and the time frames involved with people losing their jobs, or uncertain about where they are going to live over the next year, underscores how important it is for the federal government to be a strong, swift, effective partner with local and state governments in dealing with these kinds of disasters generally,” Obama said.

Obama sought to downplay political squabbles. “This obviously is not a partisan issue,” Obama said. “This is an issue where all Americans and all Iowans certainly are joined together and want to see the best possible outcome, but there does seem to be sometime some disconnect between what’s happening in Washington and what’s happening here on the ground so that’s what we want to focus on here this morning.”

Scott Jamieson runs a non-profit agency in Cedar Rapids that had its office flooded, but still was able to keep delivering meals-on-wheels to its elderly clients and offer its counseling services to the mentally ill and to those who’re suffering a credit crisis. Jamieson offered his opinion of the response of the federal government to the plight of flood victims.

When you talked about the federal government as being powerful and effective and swift, I think two out of the three are there. The swiftness is something that we must work on,” Jamieson told Obama. “Disasters in this country are not new, and for it take as long as it does for the federal government to ramp up and work through Governor Culver’s office and work back into (Cedar Rapids Mayor) Kay Halloran’s office is almost incomprehensible in this day and age.”

“We cannot let people wait,” Culver said. “We have thousands of people trying to figure out where they’re going to live…but we can’t give them definitive answers until we know what kind of support we’re going to get from Washington in terms of financial assistance.”

Katherine Marcano met Obama last year as he campaigned in Iowa and he sometimes mentions her speeches, outlining her inability to get health insurance for herself and her sister, who has cerebral palsy. Marcano’s apartment was flooded out of her apartment for 44 days. For two weeks, she lived with strangers who heard of her plight, then moved into a dorm at Kirkwood College to be closer to her job.

“It was five females in one tiny apartment sharing bathrooms. I mean, imagine you needing to use the bathroom and having to waiting in line. That really sucks,” she said. “…There was sometimes (people who) would get wild in there and there was just too much noise and I have to be at work at 2 a.m. or 2:30 a.m., depending on the day. I would just have to go to work and sleep on the bathroom floor, you know, and I did that many, many times.”

Marcano works at FedEx and she said fellow FedEx employees she didn’t know from Des Moines and elsewhere sent her letters and money after hearing of her story. She used the money to send her sister to live with relatives on the east coast until they could return to their apartment. She’s back in that apartment, but she told Obama she’s struggled to buy cleaning supplies and paint to repair the damage.