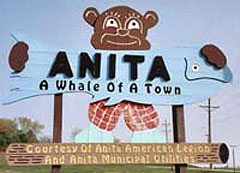 Two small towns in western Iowa will hold celebrations Saturday that are sure to benefit local livestock producers.

“We order about 1,200 pounds of choice ribeye,” Ronfeldt says, “and we usually serve 1,000 to 1,300 steaks the night of our celebration.” Other activities Saturday in Anita include a Triathalon, parade, games and a live rock band.

As motorists enter the town of Anita, they’re greeted by a sign depicting a bear holding up a whale. The sign reads, “Anita, a whale of a town.”

Also Saturday, just a few miles north of Anita, residents of Audubon will be celebrating the 58th annual Operation T-Bone Days. The food will include hundreds of steak sandwiches and hamburgers. Local farmer Dale Sloth will serve as grand marshal of the Operation T-bone Parade at 1 p.m.

The 82-year-old Sloth says the celebration dates back to 1951, when local producers first gathered to send 43 train cars of cattle to market Chicago. Sloth says the annual trek to Chicago continued until 1967. After that, area producers would sent the cattle to a packing house in Oakland, Iowa or Omaha, Nebraska. Saturday’s events in Audubon will also include a chili cookoff, water fights, live music and fireworks.