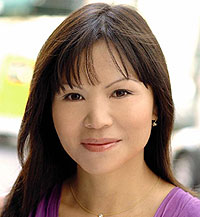 n independent film that was a hit at the Tribecca Film Festival is making its midwestern debut in Des Moines this weekend. Fay Ann Lee wrote and directed the film.

It’s called “ Falling for Grace ” and is a romantic comedy about a working-class girl from New York Chinatown who worked her way up in the financial world.

She gets invited to a fancy party where she meets a lot of important individuals and gets mistaken for an heiress from Hong Kong. Lee is trying to buck the establishment in the film world by pushing it independently.

Lee says the film didn’t get picked up by a major distributor as they thought a story about an Asian-American woman was not mainstream enough. So Lee went out across the country seeking theaters to open the movie. Lee’s work in getting the film into theaters eventually led to the Iowa showing.

Lee says the owner of the Fleur Cinema in Des Moines, Mike Coppola, was on vacation in Arizona and saw it, and asked to bring it to Iowa. Lee says having the film in Iowa is important as it can show the film does have appeal to mainstream America. She encourages those who have had trouble getting noticed.

Lee says there probably always is an audience out there, you just have to find it. She says getting a film picked up by a major distributor is like winning the lottery, so Lee suggest you follow her lead and go out and meet theater owners and try to get the film shown.

The owner of the Fluer in Des Moines plans to donate part of the proceeds from the movie to flood relief. The film opened Friday and will be shown today (Saturday) at 1:30, 4:30, seven and 9:30 p-m.