You are here: Home / Politics / Govt / Congressman King among those protesting on House floor 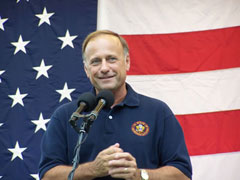 Congressman Steve King is among the Republicans who are staging a protest on the floor of the U.S. House of Representatives, giving speeches railing at Democrats over the issue of energy policy.

"I’ve just stepped off the floor. Maybe you can hear some of the applause in the background," King said during a telephone interview with Radio Iowa.

Tourists in the nation’s capitol building are being ushered by King and the other Republicans in Congress to sit on the floor of the House to listen to the Republicans speak.

"This is the time to come to Washington," King said. "…A member of Congress like myself will personally escort you onto the floor of the House of Representatives, a place where only members are allowed when we’re in session and it’s full of people right now and as tourists come in, we’re walking them down and they’re sitting in the House chambers among the members of Congress in the same place where these historic debates have taken place and this is truly an historic debate."

Last Friday, Democrats who control the debate agenda in the House adjourned and shut off the lights, the sound system and the C-SPAN cameras when Republicans refused to leave the floor.

"The game plan hasn’t quite taken shape yet," King said. "I mean, this is a real revolution. This is not something that was planned and strategized. It happened spontaneously and the people that are here are the people that care the most and most of us that are here today are the ones who were here on Friday. There are others that are coming in. We’ll do this as long as it takes."

President Bush, a fellow Republican, has the authority to call congress back in special session, but King believes that’s unlikely. The real target of this protest is House Speaker Nancy Pelosi, a Democrat from San Francisco, who also has the power to reconvene congress in special session in August rather than wait until the scheduled date in September.

"I think that this is something that Speaker Pelosi has got to do. She’s the one who has blocked all the votes," King said. "…This is a problem that comes when you come with San Francisco values and decide to run the United States of America with a draconian approach that shut down the development of energy and as the energy supply dwindles, the prices go up."

King backs drilling for oil and natural gas in the Arctic National Wildlife Refuge and on the continental shelf — moves the U.S. House voted to make when Republicans were in control earlier this decade, but which failed to make it out of the U.S. Senate.