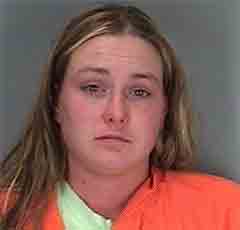 The Polk County Sheriff’s department says they believe the whole thing started as 23-year-old Johnathon Trigg and his girlfriend, 24-year-old Cody Cockerham were walking home from a party.

The couple met a group of people on the way and exchanged words and then an argument started. Deputies says some of the people went into the street and a fight started between Johnathon Trigg at least one person. As others from the group tried to break up the fight, Deputies say Cody Cockerham pulled out a knife and started stabbing people.

Deputies say 19-year-old Anthony Miklus of Urbandale, 26-year-old Larry Ruby the third, 20-year-old Jason Benton, and 32-year-old Cody Reinier, were all seriously injured. Cody Cockerham was charged with three counts of attempted murder and one assault charge, while her boyfriend Johnathan Trigg was charged with pubic intoxication and disorderly conduct.