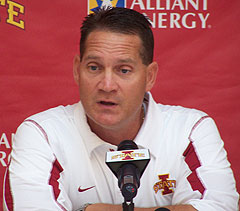 Iowa State football coach Gene Chizik isn’t promising to take the team to a bowl game in his second season, but he isn’t discouraging fans from wishing for one either.

Chizik says the question is what is a successful season, and he says he won’t set a win-loss number.

“If there’s a noticeable improvement in our football team, you’ll see it, I think it’ll be glaring.” Chizek says it would be nice to go to a bowl game and “to ask if that’s out of the realm of hope, no I don’t think it is at all.”

Chizik says they are still trying to find experienced leadership to replace those who graduated last year. Chizik says they are coming together as a team, but he says they don’t have anyone yet who has stood out as a complete team leader. He says that’s alright, because there are no superstars on the team.

Oklahoma and Texas are off the schedule this year, but Chizik doesn’t think that makes it automatic that team will do better than last year’s 2-6 conference record.

“I won’t miss Texas or Oklahoma, I promise you,” Chizik says. But he says you can’t discount Oklahoma State and Texas A&M. He says they’re switching teams, but says this is the Big 12 and the teams are all good. Iowa State opens the season on Thursday August 28th against South Dakota State.