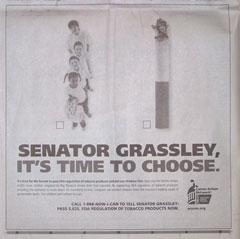 The only wrinkle is, Grassley says he’s already made up his mind to support the bill.

"They’re wasting their money because I’ve already voted for a program similar to that so I don’t know why they’re bothering to run the ad," Greassley says, "I’ve had three delegations coming out to Washington to talk to me about it and I’ve had two or three different phone calls, so they’re wasting their money when I’ve already told them I was going to vote for the bill."

The ads, paid for by the American Cancer Society’s Cancer Action Network, feature a group of smiling children standing beside a giant smoldering cigarette and say: "Each day the Senate delays, 4,000 more children targeted by Big Tobacco smoke their first cigarette." The proposal would give the F-D-A the authority to crack down on marketing tobacco to kids. Grassley says he’s already sold on the idea and wonders why the American Cancer Society would shell out big bucks for half-page ads.

Grassley says, "They oughta’ spend their money on cancer research instead of spending it on an ad, wasting their money." Iowa’s other U.S. Senator, Tom Harkin, was not mentioned in the ad as Harkin’s already voted for the bill in committee and is a co-sponsor. Grassley isn’t on that particular panel so he’s not technically on record, as yet.

Peggy Huppert, Iowa director of government relations for the American Cancer Society, says the ads will be running in the Des Moines and Cedar Rapids papers several times this week and next week. Huppert says they had several goals in mind with the ad campaign.

Huppert says: "We have been trying to get Senator Grassley to co-sponsor this bill. We also have a concern about not adding amendments. We’re concerned about having enough votes to prevent a filibuster. Finally, President Bush has threatened to veto this bill so we’re concerned about getting senators to commit to overriding a veto." Before Radio Iowa questioned Grassley on the issue, Huppert says Grassley had not voiced support for the measure.

"Senator Grassley has not committed to any of those things," Huppert says, "so that’s why we’re doing this, to up the level of commitment." When Huppert was read a transcript of Grassley’s direct quotes on the issue, she said, "That’s certainly good news." Huppert says the ads in the two Iowa papers will cost the non-profit agency a combined $48,000.