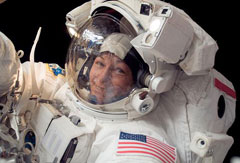 The first Iowa woman in space is getting the royal treatment in a more down-to-earth role as grand marshal of tonight’s Iowa State Fair Parade.

Beaconsfield native Peggy Whitson recalls getting her first taste of cotton candy during a trip to the “big city” of Des Moines for the state fair as a girl.

Whitson says, “We hadn’t ever had it at the county fair or anything and so I remember the first time was at the state fair.” Whitson admits she’s not sure what all her duties entail as parade grand marshal, laughing, as says she’ll show up in her flight suit and try to wave like a princess.

Whitson holds several world records for her accomplishments in orbit, including most time spacewalking by a woman, at nearly 40 hours. She was also the first woman commander of the International Space Station, returning from her latest mission in April. NASA’s most-experienced astronaut grew up on the family farm in southern Iowa and recalls the annual fairs being a big deal.

“We always went to the county fair but I did go to the state fair because I did 4-H presentations up there and occasionally we would go up as a family, do the rides, see the cattle barn, the hog barn, stuff like that.” Whitson travels across the nation now, promoting NASA and presenting slide- and video-shows that detail her combined 377 days in orbit during two missions aboard the International Space Station. She laughs, her current P-R ventures are a far cry from her childhood trips to the fair.

“The presentations I usually gave were things on home economics. I remember I did one that was on different types of things to make with bread dough.” Whitson’s ridden a space shuttle and a Russian rocket into orbit, so the fair midway rides may not be as spectacular as they seemed years ago: “You know, I think they probably just aren’t as fun as the real thing.”

During an earlier interview with Radio Iowa, Whitson said she was able to see the state fairgrounds in Des Moines, from orbit and took pictures of it from her space station perch more than 200 miles up. The State Fair Parade begins in downtown Des Moines at 6:15 tonight. The fair officially opens Thursday morning.