You are here: Home / News / Iowa Little League champ knocked out of tourney 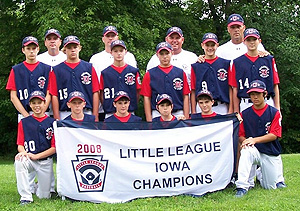 Iowa was knocked out of the race to make the Little League World Series today in the semifinals of the Midwest Regional Tournament in Indianapolis, Indiana.

The top-seeded team from Urbandale fell to fourth-seeded Minnesota 3-2.

Urbandale fell behind 3-0 in the top of the first inning, but made a comeback scoring two runs in the bottom of the second. Urbandale couldn’t gain the lead as the Minnesota pitcher held them to just two hits for the ballgame.

Minnesota will face the team from the Dakotas Saturday night in the Midwest Regional final for a trip to Williamsport, Pennsylvania.