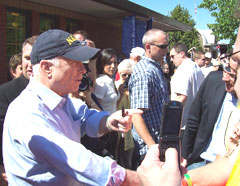 Republican presidential candidate John McCain visited the Iowa State Fair this morning, calling the U.S. heartland the “real” America. McCain’s first stop on the Fairgrounds was in the swine barn.

“I just came from one of my favorite spots to visit in this whole Fair and that is to see the prize winning boar — Freight Train! 1253 pounds,” McCain said, referring to the name and weight of the animal that won the biggest boar contest. “That was a great experience and as soon as I finish here I’m going to try to have a pork-chop-on-a-stick and a deep-fried Twinkie.”

McCain’s second stop was at The Des Moines Register’s Soap Box, where he gave a short speech to a large crowd that waited for over an hour in the sun for a glimpse of the candidate. “It’s great to be back in the heartland of America, the Iowa State Fair,” McCain said. “Thank you all.” 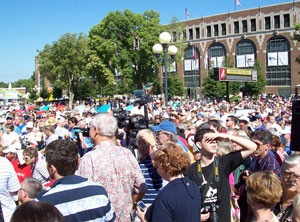 McCain visited the Fair last summer and had promised to return to the “Soap Box” this August.

“This is the heartland of America. This is what America is all about. This is the people I want to know and meet,” McCain said. “And in the rigors of a presidential campaign — people talk about it — I get a chance to come here and meet and greet the real America, the people who are providing providing products all over this world.”

McCain praised Iowa farmers for their prowess at pork production and layed out his goals for weening America off its dependence on foreign oil. “Some of that money ends up in the hands of terrorist organizations,” McCain said, then the sound system screeched.

“This microphone brought to you by the Democratic National Committee,” McCain joked and the crowd laughed.

But at the end of his speech, McCain highlighted his opposition to the federal subsidy for ethanol fuel which Iowa corn farmers back. “I don’t believe in ethanol subsidies, but I believe in renewable fuels,” McCain said. “I believe we have to do all of those things, restore out economy, but my friends — we will disagree on a specific issue and that’s healthy.”

McCain is attending a private fundraiser over the noon-hour at a Des Moines country club.