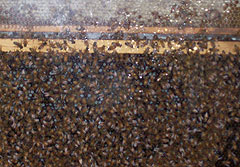 While scientists continue to study the mysterious decline in honey bees worldwide, it appears the beekeeping industry in Iowa is growing. Donna Brahms of Cumberland is president of the Iowa Honey Producers Association, which now has nearly 400 members. She says Colony Collapse Disorder (CCD), a syndrome that first appeared in 2006, is not something to take lightly.

Honey bees are critical to agricultural pollination. "If we have no honey bees, our food essentially stops," Brahms said. "Every third bite we eat is attributed to a honey bee, so that’s a lot of food." CCD is characterized by the disappearance of adult honey bees in a hive. Last year, across the U.S., a survey showed beekeepers lost about 35 percent of their hives.

"I think Colony Collapse Disorder is something we’re going to have to learn to live with," Brahms said. "I don’t think we can attribute it to any one cause. It’s a number of things. The habitat for bees is not as good as it used to be and there’s a lot of chemical spraying."

Aside from the increasing number of beekeepers in Iowa, another sign that the industry is growing in the state came last February. That’s when Iowa hired State Apiarist Andy Joseph. Brahms says Joseph is compiling data, which the state essentially lost during a roughly six year period without a state apiarist. Brahms said of Joseph, "We’re really excited about having someone that can help us along and guide us through problems in the beekeeping industry."

Joseph spends some of his time traveling the state and speaking to school children. Brahms says her organization is working to get more kids interested in becoming beekeepers. "We’re trying to grow our industry," Brahms explained. "We’re kind of an aging industry. The beekeepers are getting older. We need to encourage younger people, so we’re hoping even with the problems the honey bees are having that we’re expanding."

The Iowa Honey Producers Association has a sales booth and display set up in the Agriculture Building at the Iowa State Fair, which runs through August 17 in Des Moines.