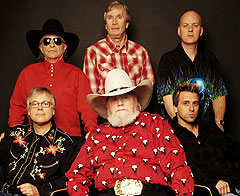 A man who’s celebrating 50 years of making music this year will headline tonight’s Grandstand show at the Iowa State Fair in Des Moines. Charlie Daniels is still recording and touring at the age of 71.

"I love playing music for people," Daniels told Radio Iowa. "That’s all I’ve really cared about doing my entire career is just being able to perform for people and have them enjoy the things that I do."

Charlie Daniels was recognized for his contributions to rock, country, bluegrass and gospel music this year when he was officially inducted into the Grand Ole Opry.

He says "The Devil Went Down to Georgia" was almost never written or recorded. Daniels added the tune to the album "Million Mile Reflections" when he realized the record did not include a song featuring a fiddle.

"We said, ‘hey, we need a fiddle song,’" Daniels explained. "I just had this idea is my head about the devil went down to Georgia and I took the band into the rehearsal studio. We just started putting bits and pieces in and a couple days later we went back to the recording studio and recorded it."

Daniels’ latest album, titled "Deuces", is a collection of duets with artists that include Dolly Parton and Vince Gill. "It’s pretty neat standing across the microphone from Dolly Parton and singing with her. It was the same way with everybody. I told Vince Gill, ‘I’m supposed to be producing this record, but I’m not going to tell you how to sing because I don’t feel qualified,’" Daniels said. "Someone asked me, ‘did you see Dolly Parton without her makeup?’ I said no, she came in in the morning and looked like she just stepped off the pages of a fashion magazine."

Tonight’s show is at 8 p.m. and includes opening acts .38 Special and Shooter Jennings.