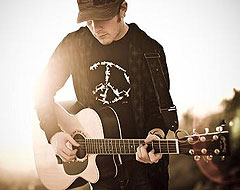 A pop songwriter from eastern Iowa is finding fast fame and fortune in the Hollywood music business.

Jason Reeves dropped out of the University of Iowa, decided to pursue his real dream of making music and made his way to L.A., where he now lives.

During his recording session, which was only supposed to run a few days, he met a woman named Colbie Caillat a wanna-be singer — and that’s where Reeves says his life changed, radically.

Reeves says, “I’d planned on being here for about a week when I initially came out just to record and I fell in love with California and decided I couldn’t go back, so I needed to find friends and, strangely enough, she was the first person I met and we became really good friends right away and just started making music together.”

The team of Reeves and Caillat began writing songs — two of which made it to the top five in the U.S. pop charts in recent weeks, including “Bubbly” which hit number-one. Reeves says: “It’s really strange that all this happened out of us just hanging out and writing songs. We used to do that every day with no intention of that really happening. It kinda’ came out of nowhere.”

Reeves, a 24-year-old from Iowa City, co-wrote ten of the songs on Caillat’s first album, which went platinum, and now he’s releasing his own C-D, “The Magnificent Adventures of Heartache.” It’s online now and will be in stores September 9th. Reeves admits it’s an incredibly quick ride he’s taken to stardom, with two top-ten hits in his first crack at songwriting.

Reeves says, “Hopefully, I’ve got another couple coming, we’ll see. The numbers aren’t that important to me. It’s just that I’m finally doing music full-time and I guess that’s my only goal, just to keep making music. As long as I can do that, I’ll be all right.” Reeves goes back on tour later this month, with dates primarily in the western U.S., though he intends to return to stages in his home state of Iowa soon.

For more on Reeves’ and his album, visit his website .