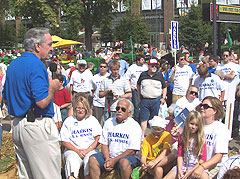 Tom Harkin, the Democrat who is seeking a fifth term in the senate, says it’s time to break our dependence on crude oil and switch to other forms of energy.

“We’re at a point in time right now like we were when we went from horses to tractors,” Harkin says. “You know, I’ll bet there were a lot of people who said, ‘Oh, my gosh! We’ve got to stick with horses.’ I’ll bet there were a lot of saddle-makers and harness-makers who said, ‘You’ll put me out of work. Those horses are just fine. Those newfangled contraptions? Forget it.'”

Harkin opposes expanded drilling in the U.S. “Are we going to chase the last barrel of oil on the outer continental shelf no matter how expensive it is? Forget about the environment. I’m talking about economics. You go out on the outer continental shelf, drill, that oil — 10 to 15 years to get it — it’ll come in at $150 to $200 a barrel,” Harkin says. “It won’t replace the imported oil. It’ll just replace the oil that we’re running out of in this country.”

Harkin says the solution is to make a significant change. “Who wrote in stone that our cars have to run on gasoline?” Harkin says. “…What if instead of chasing that last barrel of oil, no matter how expensive it is, we — through incentives and mandates and taxes — we change our automobile fleet in the next 10 to 15 years and make more electric cars?” 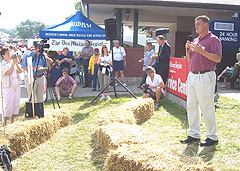 Christopher Reed is the Republican challenging Harkin’s reelection. “My opponent has no desire to drill for oil. None.

His plan is simply to tax production and expand government,” Reed says. “That will never put one drop of oil in your tank.”

Reed supports expanded drilling along the U.S. coastline, as well as drilling in the Arctic National Wildlife Refuge. “My plan is to drill here, drill now and drill often,” Reed says. “….We spend $700 billion a year importing foreign oil. That is money that we could keep here domestically, create American jobs and get a product made in America.”

Reed says Americans need to learn how to conserve energy, but he says government mandates aren’t the answer. “In the month of May this year Americans drove 10 billion miles less than the May previous to that and in June we drove 12 billion miles less than the June before that. That shows that Americans, on their own, are conserving. We don’t need the government to tell us where we can regulate our thermostat, how many miles we can drive, how much gas we can buy,” Reed says. “What we need are Americans who are smart enough and know what they can get away with and afford to do.”

Reed and Harkin made their comments during separate appearances at The Des Moines Register’s Soap Box on the state fairgrounds.