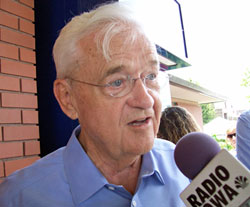 Congressman Leonard Boswell, a Democrat from Des Moines, says he’s fine and has no plans to retire. Boswell, who is 74, recently spent two weeks in the hospital.

During an appearance at The Des Moines Register’s Soap Box on the Iowa State Fair, a fairgoer asked Boswell if he was in good health. “Yes, I am. Come up here and take a hold of me if you don’t think I’m in good health,” Boswell replied. “I’m feeling very, very good.”

Boswell was admitted to a Washington, D.C. hospital on Wednesday, July 9th, for a procedure his chief of staff said was “a revision from his previous surgery.” In 2005, Boswell had a large, non-cancerous tumor removed from his abdomen. Boswell told reporters this afternoon that he is “dang good.”

“I’ve got a lot to be thankful for. I’m feeling good. I did some elective, corrective (surgery) — you’ve heard all that stuff so I won’t go back through all that,” Boswell said. “It turned out good and I’m glad I’ve got it behind me and the doctors are happy and so is Leonard.”

Boswell is seeking a sixth term in the U.S. House. He faces Republican Kim Schmett on the November ballot and today’s State Fair visit was among Boswell’s first public campaign appearances since he was released from the hospital. Boswell says his doctor has given him a positive report. “I think it went extremely well and I’m feeling good and getting my strength back out and I’m out and going,” Boswell said. “(I’m) very upbeat and looking forward to getting into full swing and we’re just about there.”

Boswell told reporters he has no plans to retire. “Oh, I’m not even thinking about that. There’s so much on the plate right now that’s not on my the mind. You know, I’ve said as long as the people want me to serve and I have the desire — which I do have — and there’s things to be done where feel like I’m making a contribution, then I want to continue to serve but I don’t have (any) goal for any set length of time or anything like that,” Boswell said. “Let’s let that decide as it comes along.”