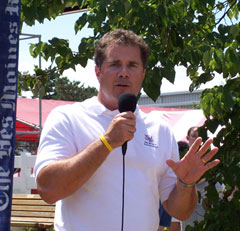 "When people talk about drilling in Alaska, there are already 20 million acres available to use in the National Petroleum Reserve in Alaska that we could be drilling on right now that oil companies have leases to and they’re not using," Braley says.

The National Petroleum Reserve is to the west of the Arctic National Wildlife Refuge.

Braley also opposes opening more of the U.S. coastline to drilling, as he says there’s 68 million acres along the coasts that oil companies already have leases to explore. "The United States has proven oil reserves of less than two percent of the entire world and yet we consume 25 percent of the world’s oil so the bottom line is we will never be able to drill our way out of this problem," Braley says. "We have to start by drilling where we have the opportunity."

Braley also dismisses the complaints of oil company executives who say one reason gas prices are high is because there hasn’t been a new refinery built in the U.S. since 1976. "The oil companies have had expedited approval process for refineries since 2003 and not one oil company has asked for permission to build a new refinery under that expedited process," Braley says. "You might ask yourself: ‘Why is that?’ Well, right now the refineries are running at under 90 percent of their capacity so our refineries right now have the ability to produce more oil and the oil companies are choosing not to do that." 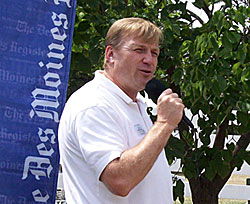 Braley’s Republican opponent, David Hartsuch of Bettendorf, says Braley was wrong to vote against turning military installations that are no longer in use into refineries.

"I think that was a proposal which would have really expedited refining in America," Hartsuch says. "I’d like to see a refinery in Iowa. We’re perfectly well-suited for this, considering ethanol and other biofuels that we might produce."

Hartsuch and Braley both spoke this week at The Des Moines Register "Soap Box" on the state fairgrounds. Hartsuch told fairgoers U.S. energy policy needs to expand beyond just drilling for more oil, to conservation directed at the nation’s farmers. "I believe that we need leadership that’s going to work to bring an agricultural energy tax credit so that we can bring new agricultural techniques, etcetera, that use less energy," Hartsuch said. "This would include new types of grain drying, encouraging no-till farming methods and also biomass."

Hartsuch, the Republican, is an E.R. doctor who is midway through his first term as a state senator. Braley, the Democrat, is a trial lawyer who is seeking a second term in congress.