You are here: Home / Politics / Govt / King’s opponent says voters "want a servant, not a king" 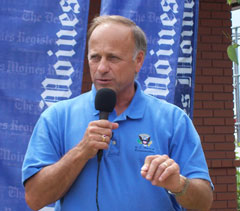 Fifth district congressional candidate Rob Hubler of Council Bluffs, a retired minister, says King thinks he’s a king rather than a servant of the people.

"Congressman King has voted every year…to increase his pay $15,000 over the last six years," Hubler told fairgoers. "Now, I don’t know how many of you have had a $15,000 increase in pay over the past six years. Most people have sustained a decrease in wages and a decrease in income."

King says he’s always voted for pay raises for public officials, dating back to when he was a member of the Iowa legislature, and he continued that pattern when he was elected to congress. "If nobody has enough nerve to vote for a pay raise, we’d still be making what the first congress was making instead of the 110th congress and so if I’m not going to vote for a raise, I can’t in good conscience cash the check and I look at that and I think, ‘Well, I can’t afford not to cash the check, so I have to vote for the pay raise,’" King says, "and by the way, I think I’m earning it." 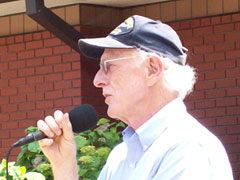 The first congress met in 1789. It wasn’t until 1815 that members of congress began drawing a salary and it was $1500 a year. King’s congressional salary today is $169,300. "Some of us probably deserved a pay cut, some deserved a pay raise and some deserved to be fired," King says, "and it’s up to the voters to figure out who that is."