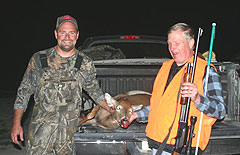 People with disabilities from partial paralysis to full blindness are learning how to hunt and kill deer in a special southwest Iowa event.

Ron Mason Junior organizes the Whitetail Challenge, an annual deer hunt on a thousand acres of Madison County land. Mason, who lives in Earlham, says they’ve had well over 60 people with disabilities take part in the hunts since the first one in 2003.

Mason says the rewards for participants include, "enjoying the outdoors and realizing that they are capable of doing things that they didn’t even dream of doing, whether they have a spinal cord injury or any other kind of disability." He says the youngest hunter was a nine-year-old boy in a wheelchair who’s now shot three deer.

Safety is always a paramount issue, Mason says. It usually takes three volunteers for every participant in a wheelchair — a guide, a driver and someone to help them in and out of the pickup and into the deer blind. Mason says the event’s first blind hunter was 57-year-old Roger Erpelding of Windsor Heights. Mason says Erpelding had always dreamed of deer hunting, had heard relatives talk of their exploits in the forest, and was thrilled to go himself, at last.

Mason says, "We paired him up with a guide and the guide actually aimed the gun and Roger would reach around behind — they practiced this — and then at the right time, he squeezed the trigger and actually shot a deer two years ago." Erpelding has been blind since birth and says it was one of his life’s proudest moments to serve his family grilled roast from that deer at Christmas dinner.

He says the hunt is for anyone with a disability, including the blind. Mason says: "It was very unusual. It was quite rewarding to see Roger. When they got the deer, they brought it back in the pickup and to go over and watch Roger pet the deer, feel its ears and its nose, that was the way he was ‘seeing’ that animal."

This year’s hunt is scheduled for the weekend of September 26-28. Space is still available. Contact Mason at (515) 834-9111 or through the hunt’s website at: "www.millcreekranch.net" and click on "Disabled Hunts."