You are here: Home / Education / "Raising Readers" in Storm Lake and Perry 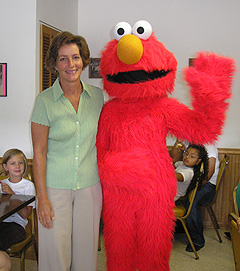 "We really looked at where the needs were in Iowa and so we looked at things like the ‘free and reduced lunch list’ for school districts. We looked at the ‘schools in need of assistance’ list," she says, "and we really looked for some communities that were similar, where we could develop a model that would be replicable in other towns throughout Iowa."

Peitzman is working with local libraries, day care centers, parents and schools in those two communities, as well as various civic groups. "The goal of ‘Raising Readers’ is really focusing on ages two to eight, really trying to increase the early literacy skills of these children so it’s really trying to raise readers and help parents and caregivers realize that they are their child’s first teacher, " Peitzman says.

Checking books out of the library is fine, but Peitzman says it’s crucial for children to have books in their home that they can read over and over. "We know that research shows that children love repetition and if you’re a parent and you’ve read that same book over and over, we know that that really has value because children are learning every time and they’re picking up on that vocabulary and those skills," Peitzman says.

During "Raising Readers Day" at the Iowa State Fair last week Iowa’s First Lady, Mari Culver, read to children from one of the stages on the fairgrounds and Storm Lake Mayor John Kruse walked the fairgrounds with "Elmo" to show his support of the effort. "You know, our kids are our future and anything we can do, especially in a culturally-diverse community like we’ve got in Storm Lake, anything that we can do to make that easier for them and expand their ability to learn and become a very viable part of our community and become community leaders some day I think all those programs, programs like this, are definitely a benefit," Kruse says. 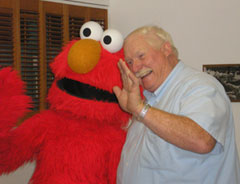 According to Kruse, if you can’t communicate, you can’t accomplish anything. "It’s important that everybody be able to read, write and listen," Kruse says.

Kruse intends to read to children in Storm Lake as part of the project, as he remembers learning to read when he went to kindergarten. "I’m sure my folks taught me some things to start with," he says, "but I remember Dick, Jane and Sally and Spot."

IPTV already has been running a "Ready to Learn" program which gives free books to young readers who live in low income households. The network’s "Word World" and "Super Why!" programs teach literacy skills to youngsters. The enhanced reading effort in Storm Lake and Perry is funded, in part, by a grant from the U.S. Department of Education.