You are here: Home / Human Interest / One gold and two disappointments for Iowans at Olympics today 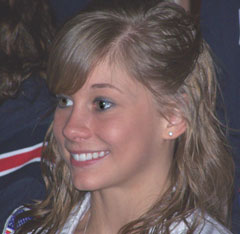 Three Iowans completed their competition today at the Olympics in Beijing. Shawn Johnson finally has gold. The 16-year-old gymnast from West Des Moines scored a 16.225 with her difficult balance beam routine and edged teammate Nastia Liukin, who finished with the silver.

Johnson, who will be a junior at Valley High School when she returns home next week, had captured three silver medals before today’s victory. Meanwhile, Des Moines native Lolo Jones’ run at the Olympics ended in devastating fashion.

The 26-year-old Roosevelt grad was leading the 100 meter hurdles finals, when she hit the second to last hurdle and stumbled to a 7th place finish. Her teammate, Dawn Harper, took the gold. Former Iowa Hawkeye Mike Zadick of Solon, a late add to the Olympics in freestyle wrestling, lost his first two matches at 132 pounds and is out of the competition.