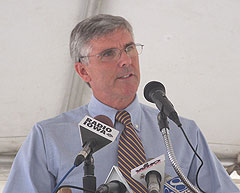 Iowa Congressman Leonard Boswell, a Democrat from Des Moines, is hoping a bill he co-sponsored to provide a loan guarantee for the builders of an ethanol pipeline will see some action this time around. Boswell says things are different as he tries the bill a second time.

Boswell says "the intensity of the concern has changed dramatically," with the changes in Congress and the increase in the cost of gas, the issue is on people’s minds. While he couldn’t get the bill out of committee last time.

"We think it’s doable, and we think that the people are going to feel like it’s necessary and we’re going to get a lot of push for it, so we’re looking forward to getting more people involved and trying to move things along," Boswell says.

Boswell made his comments at the Magellan Pipeline Company terminal in Pleasant Hill today. Magellan director of government affairs, Bruce Heine, says the bill would guarantee 90% of the loan used to build an ethanol pipeline. 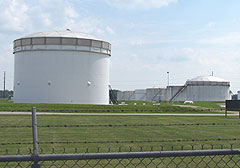 Heine says Magellan wants to build the ethanol pipeline to save transportation costs, but needs the loan guarantee to get enough investors.

He says the project is well over three billion dollars in scope and would run some 1,700 miles from northwest Iowa into New York Harbor. Heine says the 90-percent guarantee is important to investors in the pipeline.

Heine says the loan guarantee would support the investment if there are changes that cut the 36-billion gallon requirement in the federal renewable fuels standard. Boswell co-sponsered the bill with Nebraska Republican Congressman Lee Terry.