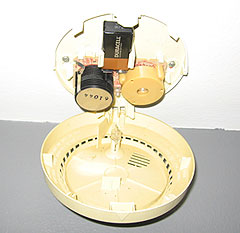 There have been 28 fire fatalities in Iowa this year and officials say 10 of the cases involved a home that did not have a working smoke detector.

State Fire Marshal Jim Kenkel says investigators are finding too many smoke detectors in charred houses that have no battery. He says the average price for a two pack of 9-volt batteries is $5.50.

The 28 fire deaths so far this year compares to 30 fatalities in Iowa during all of last year. Kenkel says there’s no clear cut explanation for the increase in fatal fires, but many lives could’ve been saved if the home had a working alarm.

Kenkel says homeowners should never remove smoke alarm batteries to use them in games or toys – or to avoid the noise of the alarm when someone’s burned food in the kitchen. Beginning October 1st, all new homes and buildings constructed in Iowa will be required to have dual-sensored smoke detectors. Kenkel says the devices can detect both slow, smoldering type fires and fires that contain fast moving, intense flames.