You are here: Home / Military / Loebsack just back from Iraq, Pakistan, Afghanistan 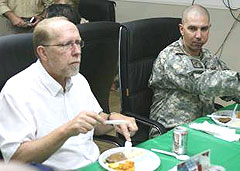 Congressman Dave Loebsack of Mount Vernon is just back from an eight-day trip to Iraq, Pakistan and Afghanistan.

Loebsack, a Democrat who’s a member of the House Armed Services Committee, was in the same region this past January. Loebsack says he saw the evidence of increased hostilities in Afghanistan.

"On the ring road — the main road, Highway 1 — the further we got from Kabul the more IED explosions, you know, were clear on the road. In fact, I saw two scenes of smoldering vehicles that had recently been attacked either by IEDs or other kinds of rockets, so it’s clearly worse in that sense and that’s why we sent more troops," Loebsack says, "That’s why I think there’s a bipartisan consensus forming in congress for a recommitment to Afghanistan."

Loebsack says it "remains to be determined" just how many more troops need to be redeployed to Afghanistan. Loebsack says he saw an "improving" security situation in Iraq. "And many of those fighters in Iraq who were fighting Iraq have in fact left and gone to Afghanistan," Loebsack says, "so (Afghanistan is) really where the central front in the war on terror is located at the moment."

Loebsack and the delegation of Americans visited Pakistan just before the country’s president resigned. "We got there right in the middle of it and we weren’t sure if there was going to be a crisis while we were there or not, but it certainly made things more interesting," Loebsack says, "and the security situation was just about as tense as one could imagine and then he resigned just after we left country."

Loebsack and the other members of congress were ferried around in one of the new mine-resistant vehicles. "They’re really a godsend, if you will, for the troops. We introduced them first in Iraq," Loebsack says. "were very thankful for those M-RAPs."

M-RAP is the military’s acronym for Mine-Resistant, Ambush Protected vehicle. Loebsack was able to visit with some Iowa soldiers serving in the region, and he gave them footballs marked with an Iowa Hawkeye logo.

(Photo provided by the Department of Defense)