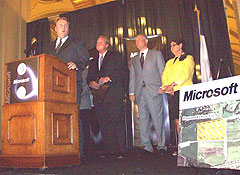 The official announcement came during a Thursday morning news conference at the statehouse where Microsoft’s Michael Manos, the general manager of the company’s data center services, discussed the reasons for Microsoft’s decision.

“The data center is really the home, the nerve center of the Internet,” Manos said. “When we start thinking about the Internet a lot of people think about the white, puffy clouds and people just using it. But at the end — at the core of the Internet — are these large facilities, filled with computers, delivering products and services to the world. Iowa will be a key hub in that infrastructure moving forward.”

Just over four dozen people will be employed at the facility, maintaining thousands of computers. “Microsoft serves over 500,000,000 unique users in its web properties every single month,” Manos says. “There will be 500,000,000 unique people visiting Iowa through the auspices of this data center.”

State and federal legislators from both parties joined Governor Chet Culver at the event. “I just want to say four words: Microsoft, welcome to Iowa,” Culver said, to applause from the crowd of economic development agents and elected officials gathered for the announcement.

The state of Iowa offered Microsoft a package of incentives to lure the operation here, including a tax break that means Microsoft will not pay sales taxes on the electricity used to run the facility’s computers. Manos, the general manager of data center services for Microsoft, says the facility planned for Iowa will be a “next generation” facility.

“A facility that drives significantly better energy efficiency than any other data center that we’re aware of in construction today,” Manos says. “Iowa, specifically West Des Moines, was the perfect location with its access to telecommunications infrastructure, access to power — all of these things have come together to help us drive an infrastructure for our next generation facilities.”

To hear more about the Microsoft facility planned for West Des Moines, click on the audio link below. Google currently operates a “server farm” in Council Bluffs.