You are here: Home / Politics / Govt / It appears Iowa Caucuses poised to be first in ’12 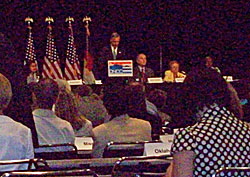 It appears Democratic presidential candidate Barack Obama and his organization want to keep Iowa’s Caucuses first in the nation but, conceding to complaints from backers of rival Hillary Clinton, a move’s afoot to tweak the rules.

The Democratic National Committee’s Rules panel met this weekend in Denver and voted to create a "Democratic Change Commission."

While the Obama campaign says it intends to keep Iowa’s Caucuses first in 2012, the Caucuses could not be held before February 1st, plus the commision is to come up with a way to keep other states from moving the dates of their primaries and caucuses earlier in the year. The goal is to have Iowa, New Hampshire, Nevada, and South Carolina hold their voting in the month of February, then other states could start to hold contests after March 5th.

Former South Carolina Governor Jim Hodges, speaking on behalf of the Obama campaign, says Iowa’s role as the kick-off contest in presidential campaigns won’t be changed. "We need to create some order to this process and for states like Michigan and Florida, it gives them a chance with this commission to make a case for some change that could be made for them to where they might fall in the order of things," Hodges says. "I think this is a very good idea, and then it allows us to clean up some issues we have, like the super delegate system that caused a great deal of heartburn, I think, for every campaign about the out-sized role that super delegates could play in the process."

Iowa Democrats have three members on the Rules Committee which voted to create this commission and Luanne Pedrick of Urbandale is one of them. Pedrick says it’s time to consider some changes in the caucuses that would allow the home-bound elderly, shift workers, or soldiers on duty elsewhere to participate. "I really don’t think there would be that many people who would take advantage of that," she says. "I know in my precinct everybody likes to get out and do the caucus when they’re energized about the candidates."

But Clinton supporters want other changes, like a paper trail where each caucus participant’s vote is recorded, just like a primary. Jon Winkleman of New York worked in Clinton’s campaign office in Ames just before the caucuses and he suggests Obama backers were bused into a caucus in Boone to skew the results. "Some of the friends I made in Iowa were at some of the rural caucuses. They knew everyone in their small town and there was a lot of people who came in on a bus, faces they didn’t recognize, who participated in the caucus and then left. Now, those people might be from the town, but they suspect they might not be from the town, but since the Iowa state party doesn’t release the list of who came and who didn’t come, we don’t know," he said.

Pedrick, the Democrat from Urbandale, disputes Winkleman’s assertions. Pedrick was the chair of her precinct caucus in Urbandale, and she says with the procedures followed by caucus chairmen and women across the state, there’s no way people could have "snuck in" and participated if they weren’t residents of the precinct.

Mike Milligan, the executive director of the Iowa Democratic Party, also rejects Winkleman’s claims that there was widespread fraud committed during the Iowa Caucuses. "Everyone that we talked to after the caucuses were very pleased with the caucuses, whether that was Senator Obama or the next vice president, Senator Biden, so everybody that we heard (from) had a good experience," Milligan says.

According to Milligan, Iowa Democrats are "open" to considering some of the ideas being advanced by critics of the caucus process — like allowing elderly shut-ins, members of the military and shift workers to participate in the caucuses by absentee ballot. "In Iowa, which I think is generally regarded as the model for caucuses, every cycle we try to improve," Milligan says. He points to the differences between the 2004 and 2008 Democratic Party caucuses in Iowa, as attendance this year was about double what it had been in 2004.

Governor Chet Culver says he’s confident Iowa will retain its first-in-the-nation status. "Senator Obama has made a commitment to keeping Iowa first. Senator Biden has deep Iowa roots as well and, you know, starting there I think that gives us a good place to make the case with, hopefully, the next president and vice president supporting us," Culver says.

Culver will speak this morning to the New Hampshire Democrats who are in Denver at the party’s national convention, a visit Culver says is part of the effort to work together with the other states which hold early contests in the presidential selection process.