You are here: Home / News / No candidates of the future wooing Iowa Democrats 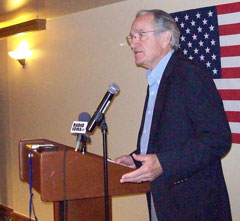 Iowa’s delegation to the Democratic National Convention heard from a 48-year-old senator this morning and the second-ranking Democrat in the U.S. House is scheduled to visit with Iowans later in the week.

But there appear to be no presidential candidates of the future on the list. At the Democratic National Convention in Los Angeles back in 2000, politicians like Dick Gephardt, Evan Bayh and Joe Biden stopped by to chat with Iowa Democrats over breakfast.

In 2004, Bill Richardson brought along jars of salsa for the Iowa Democrats at the convention in Boston. Presidential wannabees are not on the Iowa agenda at this year’s convention in Denver.

Iowa Democratic Party chairman Scott Brennan suggests presidential candidates of the future have plenty of time to lay the groundwork for a campaign “Because we intend to hold the White House until 2016,” Brennan says. “I think a lot of folks who were really interested in the White House ran in this cycle. Senator Obama’s the nominee and we anticipate winning in 2008 and then, of course, reelection in 2012, so eight years is a long time.”

Dick Myers of Iowa City, a former leader in the state legislature, suggests there’s a fatigue factor, too. “This was a pretty hard campaign and I think it took a lot out of folks — folks that won and didn’t win,” Myers says. “I think people came out of it with respect, but they also came out of it tired, but also knowing full well that there’s an awful lot of work to be done to win this election (in 2008).”

Barack Obama is campaigning this afternoon in Davenport. Davenport native Jim Leach — the former Iowa Congressman, a Republican who endorsed Obama in mid-August — is scheduled to speak this evening at the Demoratic National Convention. Senator Tom Harkin will introduce Leach to the crowd, sometime around 9 p.m. Iowa time.

Earlier this morning, Harkin delivered a bit of a pep talk to the Iowa delegation. “For those of you who are first-time convention goers, I’ll let you in on a little secret: Democratic conventions are not a cone of silence,” Harkin said. “I expect you’re going to see a lot of fizz at the Pepsi Center.”

Harkin said Republican presidential candidate John McCain was “justifiably a great military veteran and military hero,” but Harkin said that doesn’t justify making McCain president. “John McCain barely got through high school. The only way he got in the academy was because his daddy went there and his grandpa went there and they were both big admirals so he gets in the academy and then graduates fourth from the bottom of his class, so you can say that John McCain got where he is because he had good family connections,” Harkin said. “Does that remind you of someone else who is president of the United States now that got there because of family connections?”

Harkin invited fellow Senator Amy Klobuchar of Minnesota to speak to Iowa Democrats in Denver. She warned the Iowa Democrats that McCain’s attacks on Obama will get worse. “I just can’t believe John McCain, some of the attacks,” Klobuchar said. “This is what I’m going to say today…when I’m down talking to the newspeople…’People who live in seven houses shouldn’t be throwing stones.'”

Klobuchar endorsed Obama at the end of March and has campaigned across the country on Obama’s behalf. During her speech to Iowans, Klobuchar connected a McCain-directed barb to the reruns she watches on the cable channel TV Land. “It’s going to be like Gilligan’s Island all over again if we have John McCain in there for four years,” she said. “…We’re never going to get off the island.”

Listen to all of what Klobuchar and Harkin said by clicking on the audio link below.