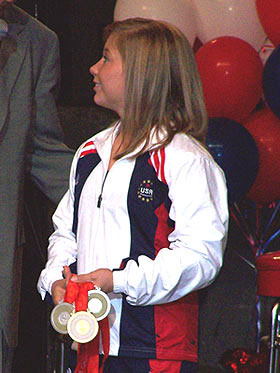 A crowd of about 7,000 in Des Moines welcomed Shawn Johnson back from the summer Olympic in Beijing. The West Des Moines gymnast captured four medals, including a gold on the balance beam.

It has been a busy time for the junior at West Des Moines Valley high school who made a detour on her way home to make an appearance on the David Letterman Show.

"This is crazy, I mean why would you come out here for me?," Johnson asked,"it doesn’t make sense, but it’s amazing." Johnson says while winning medals was exciting just getting the chance to take part in the Olympics experience was the best part.

"Just being able to be with all the athletes and stuff, being able to experience what anybody would kill for," Johnson says. She says the all-around competition was the best part as she "gave her heart and soul for that meet."

Johnson finished second in the all-around and also earned silver in the floor exercise and in the team competition. She says she is just as proud of her silver medals as she is the gold.

"Everything I put forth in that meet, I knew that I gave my best, I knew that there wasn’t anything more that I could do, and for some reason that day I was meant to have silver and the other girls were meant to have the gold," Johnson explained, "so, for me everything happens for a reason, and silver to me was better than any gold I could have had." 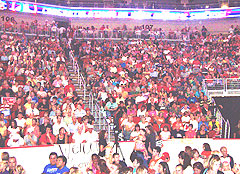 Olympic glory bring instant fame and Johnson says she is not used to being recognized wherever she goes. Her presence on a flight even led to an unfortunate injury to the pilot. She landed in Chicago and was getting a flight to New York for the David Letterman show and could be late. Johnson says the told the other passengers they had a delay and had to find another pilot. The airline employees told Johnson that when the pilot found out he was flying her, "he freaked out" and hit his head and had to go get stitches.

Johnson says she has not decided if she will try and make the U.S. team for the London games in 2012.