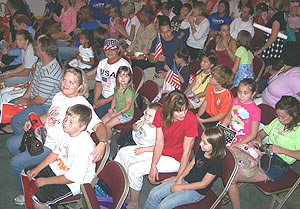 Holly Wengert, operations manager at Triad Gymnastics in Ankeny, says parents started calling after observing their own children absorbing the television competition, and then attempting their own flips off furniture.

“They started the gymnastics (competition) immediately after the opening ceremonies,” Wengert says, “so it was that first week of the Olympics we started hearing the phone ring a lot more.”

Gymnastics programs report a 20 to 30% jump in enrollment. Wengert says they’re adding more classes and staff to meet the demand. “Just to keep that sort of Olympic drive going and giving (students) things they’re striving for…we’re kind of bulking up the evaluation system that we use,” Wengert said.

The idea is to break down the individual skills kids need to master before attempting what they’ve seen on television. “It is much easier, once they’ve seen things on T.V., to say ‘this is what we’re working for, now we have to back it down and do the skills that lead up to that.’ They relate to those things that they see on T.V., but we’ve got to get them to that point first,” Wengert said.

At Sapphire Gymnastics in Urbandale, an instructor reports “nonstop talk” about Shawn Johnson and her teammates.