You are here: Home / Fires/Accidents/Disasters / Man switches from hurricane help to Iowa help 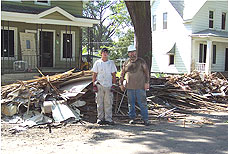 Hurricane Katrina hit the Gulf Coast three years ago this week. A western Iowa minister who’s led a half-dozen mission teams to Mississippi to rebuild homes lost in the massive storm was forced to abandon this summer’s planned trips to the Biloxi area due to Iowa’s widespread flooding and the need for help here.

Pastor Arley Ellingson says there’s a twinge of guilt at not continuing what he started down south. Pastor Ellingson says, “There’s always that guilt because we talked to friends down there, we talked to people we’ve gotten to know and you’ve have to tell them we’ve got a disaster in our own back yard and we’re just going to have to bypass them this time.”

Instead of venturing a thousand miles south to the Gulf Coast, the Methodist minister from Onawa has taken his Iowa work crews east across the Hawkeye State to flood zones in cities like Cedar Rapids and Elkader. Ellingson says he’s tentatively planning to head back to Mississippi once the chill winds of winter start whipping in Iowa.

Ellingson says: “My hope is that come January, we might be able to go down there again because of the situation up here. I think it’s going to be a little bit tougher to work up here. You may not be able to get to some places because it’s winter. Down there, we’ll be able to do a lot more work, it’ll be warmer, there’s just a lot more things that could be accomplished.”

Some of the work his team has been doing includes “mucking out” Iowa houses that were flooded in June and left with a thick coating of stinky mud inside. Ellingson says he’s encouraged so many Iowans are volunteering to help fellow Iowans to recover from the floods, in addition to mission teams from across the U.S. pitching in.

“We were talking to some people in Cedar Rapids there from Connecticut and their church has committed to two trips per month for two years,” Ellingson says. “For a single church to make that kind of a commitment is quite a wonderful and almost miraculous thing.” For Iowans who would like to get involved in the flood relief effort, he suggests contacting your nearest church, Red Cross office or visit the website of the Iowa Conference of the United Methodist Church  .