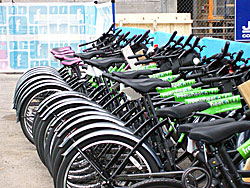 Congressman Bruce Braley of Waterloo is encouraging his fellow Democrats to ride a bike in Denver. Braley’s a member of the "bike caucus" in congress and the group has arranged for over a thousand bikes — and helmets — to be available, fore their way around Denver.

"Especially now with what’s going on with energy and gas prices, we’re doing everything we can to promote alternative transportation," Braley says. "…What we’re trying to do is get everybody from all over the country focused on how we encourage people to use less fossil fuel and one of the ways to do that is promoting things like riding your bike to work and getting kids to ride their bike to school the way a lot of us did when we were growing up."

Braley, who is 50 years old, says not only did he ride his bike to school as a child, he rode his bike every morning on a paper route, delivering The Des Moines Tribune in his hometown — Brooklyn, Iowa.

Braley would bike to his office in the nation’s capitol, if it made sense. "I don’t because I live about a block and a half from my office," Braley says, "but I did ride the last day of RAGBRAI this year."

Braley says one of his goals in congress is to find money to restore and expand a couple of bike trails in Iowa that were heavily damaged by flooding. "I’ve seen what happens in areas like southeast Minnesota along the Root River Trail, the enormous economic development that’s taken place there," Braley says.

"You look at the Cedar Valley Nature Trail between Waterloo and Cedar Rapids. with both of those communities suffering the devastation they have. Two of the bridges are out on that trail and yet if we an find a way to make that the same kind of trail facility as the Root River trail it could be enormous in terms of getting that entire corridor to bounce back economically."