You are here: Home / Education / Flooding at Greate Ape Trust of Iowa could cost over $1 million 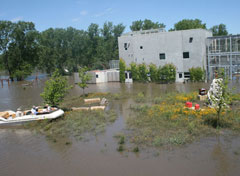 The grounds of the Great Ape Trust of Iowa in Des Moines were inundated with floodwaters earlier this year and officials say damage to the 230-acre campus will likely exceed one million dollars. Operations director Jim Aipperspach says despite all the flooding the actual homes of the orangutans and bonobos were never threatened.

“The ape buildings themselves were built up above the 100-year flood plain and they’re also very well-built, concrete structures, so the structural damage to them was really nonexistent,” Aipperspach says. The flood destroyed temporary administrative offices and knocked out electrical and computer systems, but Aipperspach says the apes were never in danger.

He says the apes are safe and the scientists were able to continue taking care of them throughout the flood. Now they’re working to get the technology back in place to continue their research. Aipperspach says the Army Corps of Engineers is doing an analysis to determine if the U.S. Highway 65-Iowa Highway 5 bypass built near the Great Ape Trust contributed to the flooding.

Aipperspach says, “To the observer, it looked like the floodwater was retarded in its flow down into the Lake Red Rock reservoir because of the 65-69 bypass. That’s just an observation. The engineering analysis will determine to what extent it actually did impact the retention of water on our campus.”

The area where the trust now sits did not go underwater during the last major Central Iowa floods in 1993, before the bypass was built, which makes Aipperspach think the road contributed to this year’s problem.