Lots of delegates at the Democratic National Convention in Denver wear crazy costumes to try to capture the attention of the cameras. One Iowa delegate, though, is quietly making a statement with his footwear.

All week long, to every event in Denver, 24-year-old Jacob Krapfl of New Vienna has been wearing a pair of sturdy boots. "I’m wearing the boots I wore when I was overseas to remind me of where I’ve been and who I’m fighting for here," Krapfl said during an interview with Radio Iowa. 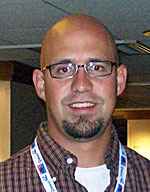 Sergeant Krapfl did two tours of duty in Iraq. He spent six months traveling highways there, searching for roadside bombs.

For his second tour, Krapfl was assigned to guard a military hospital in Baghdad. He left the Army, returned home to Iowa to farm, and is going to college full-time, too.

Now, about four years after his service in Iraq, Krapfl is serving as an Iowa Democratic Party delegate in Denver, supporting Barack Obama — and wearing his old Army boots.

"I wore these on my second deployment. My second deployment was four months long in central Baghdad. They’ve seen things that nobody else should," Krapfl says, his voice cracking with emotion. "We’ve got 150,000 pairs of boots on the ground in combat right now and every day a family’s told that their loved one’s going to come home, only being able to wear one boot and over 4,000 of those pairs of boots have been sent home, wrapped in a flag."

During the roll call of the states yesterday at the Democrartic National Convention, nine delegates from Iowa cast their votes for Hillary Clinton. The other 48 Iowans voted for Barack Obama. Krapfl is the Iowan who announced the tally. "It’s well worth it," Krapfl said of his convention experience. "I’ve been learning a lot."

Krapfl was on C-SPAN Wednesday morning, answering call-in question from viewers. One caller asked Krapfl if he believed Obama would conduct himself as admirably as Republican presidential candidate John McCain did when he was taken as a prisoner of war in Vietnam.

Krapfl recounted his answer during his interview with Radio Iowa. "Every soldier’s taught that if you’re taken prisoner it’s first in, first out, no matter your rank, and McCain did the right thing. He got out when it was his turn," Krapfl said. "And I said I believe Obama has the intestinal fortitude to the right thing and that’s what would lead him into being a great president."

A top Obama campaign organizer spoke yesterday morning to the Iowa delegation in Denver, reviewing Obama’s chances of winning the general election vote in various states. Jim Messina, Obama chief of staff, suggested this about John McCain’s home state: "If Senator McCain continues to be the schmuck he’s being, we’re going to play there, you know, and go tell some truth."

Read and hear more of what Messina had to say over on the Radio Iowa blog.