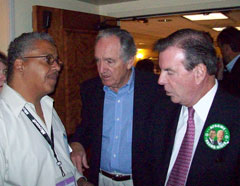 A national union leader sent a zinger toward Governor Chet Culver this morning during a public meeting of Iowa Democrats in Denver.

Gerald McEntee, president of AFSCME — the American Federation of State, County and Municipal Employees union, noted that both Culver and Iowa’s lieutenant governor are attending their party’s national convention in Denver and McEntee suggested a top AFSCME staffer in Iowa was minding the store back in Iowa.

"Chet Culver: good governor, good record — but he’s even going to make it better, right? We hope. We’ve had some discussions with the governor," Entee said, then pointedly joked at Culver’s expense. "(AFSCME’s) Marcia Nichols isn’t here, right? Marcia Nichols is the acting governor of Iowa right now, just so everybody knows it, and she just signed the ‘Fair Share’…We now have that governor."

Governor Culver has drawn the ire of unions for vetoing a bill which would have expanded the collective bargaining rights of union members who work in the public sector, and that includes AFSCME members. Culver, who was sitting in the audience, got red-faced, but stayed through the end of McEntee’s speech and applauded with the rest of the crowd at its conclusion.

The other legislation McEntee mentioned, the so-called "Fair Share" bill, would require non-union members to pay a fee for union services they use on the work site. "We’re talking to the governor about it and the state legislature, both the senate and the house," McEntee said, singling out Senate Democratic Leader Mike Gronstal of Council Bluffs as a friend of unions.

McEntee vowed that unions like AFSCME will be active in the fall campaign, but acknowledged that some white union members are reluctant to vote for Democratic nominee Barack Obama because he’s black. "I say to all those people out there in our own union and every other union in the United States: ‘If that’s the reason you can’t vote for Barack Obama, that is bullshit and you have to change your mind,’" McEntee said, to a standing ovation from Iowa Democrats. "…That is total bullshit and it should not stand today in America."

Senator Tom Harkin praised McEntee afterward for that statement, but Harkin added that when he ran for president back in 1992 he "took some heat" for using the word "bullshit" in his speeches. Audio of speech below.