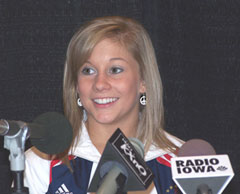 Life continues to move at a hectic pace for Olympic champion gymnast Shawn Johnson. The 16-year-old West Des Moines girl used a rigorous daily training schedule to hone the skills that won her one gold and three silver medals in Beiijing.

But with the Olympics now over the schedule for Johnson isn’t any less hectic. She led the pledge of allegiance at the Democratic National Convention in Denver Thursday, and appears on the “Tonight Show with Jay Leno” tonight.

Johnson was asked about the whirlwind following a welcome back ceremony in Des Moines Tuesday, and when she might go back to classes at West Des Moines Valley High school.

Johnson says she doesn’t see things in a different way or feel any different and can’t say if things will go back to the way they were before. “I hope not, just cause I love the way things are right now, and I feel like this is what I’ve worked for,” she explains. Johnson leaves next week to begin preparing for a 30 city tour with her fellow gymnasts.