You are here: Home / News / Youngest delegate at Republican National Convention from Iowa 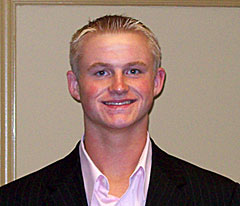 The youngest delegate at the Republican National Convention in St. Paul is 17 years old and he’s from eastern Iowa. Mike Knopf of Dubuque was born on Halloween back in 1990 and he’ll turn 18 this October 31st.

That means he was eligible to be a delegate to this week’s Republican National Convention because he can vote in November.

Knopf started getting interested in politics when he was in junior high. “I started paying attention and wanting to be part of it, so I started going to political events. I got to meet President Bush a couple of times. I met Mitt Romney twice,” Knopf says. “I even met Senator McCain.”

Knopf’s parents are Republicans. “I’ve known from my personal beliefs that I was personally conservative a Republican for a long time because I believe in the second amendment; our constitutional rights staying constitutional; I’m a pro-life person all the way; if you want to work in this country you can come in legally — that’s the way I feel — and so that’s how I chose to be a Republican,” Knopf says. “I grew up in a Republican household, but I made my own choices.”

Knopf, who will be a senior at Dubuque Senior High this fall, backed Rommey in the Caucuses because of Romney’s record as governor of Massachusetts and his business background. “But in today’s day and age it’s still hard to believe that we can have the discrimination that we do and I think that the big scare factor for a lot of voters would have been the Mormon issue,” Knopf says, referring to Romney’s Mormon faith. “I don’t understand why, but there’s nothing we can do about it.”

Knopf is a bit disappointed that President Bush and Vice President Cheney won’t be making in-person appearances here in St. Paul, due to the hurricane. “I have heard President Bush speak and I think he is a very educated man and I’ve listened to him the past eight years and I’ve supported him almost 90 percent of the time, but it’s very unfortunate that we’re not going to get to hear him speak (in person) or Mr. Cheney,” Knopf says. “But as long as the majority of the convention goes through and holds strong, I think it will be successful.”

You may see Knopf’s name on a ballot in the future, as he wants to be one of the politicians who make decisions for the country. “If you can be part of the group that actually changes things andmakes laws, that’s what I want to do,” Knopf says. “And if it does come down to being president, that’d be amazing.” Knopf hopes to attend the University of Iowa next year and major in political science.

Iowa’s status as the nation’s first caucus state was challenged in the past few days during deliberations of top-level Republicans meeting in Minneapolis. Sandy Greiner of Keota is one of Iowa’s representatives on the Rules Committee and she says Michigan and Florida may try to bring the issue up again during the convention and dislodge Iowa as first-in-the-nation. “I am still not comfortable saying, ‘It’s a done deal and it’s greased,'” Greiner says of the 2012 calendar of presidential primaries and caucuses.

Greiner was at the big pre-convention meeting of party insiders when John McCain publicly introduced Alaska Governor Sarah Palin as his running mate.  “The most stunning thing of all happened. When she was finished, the entire room stood up and gave a standing ovation to a television screen. I’ve never seen that happen before in my entire life and as you know, I’m a pretty jaded politician, so it was really a stunning moment,” Greiner says. “It was like riding a lightning bolt.”

Read more about Greiner’s experience over on the Radio Iowa blog.