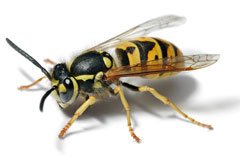 While there’s been much publicity over Iowa’s disappearing honey bee population, one bug expert says this summer, there are also fewer wasps — which frequently sting people.

Entomologist Phil Pellitteri says German yellow jackets are often mistaken for bees, but they’re wasps and they can be mean.

He says many populations of those yellow-and-black wasps fell across the Midwest this summer. Pellitteri says that’s generally good news because those wasps are responsible for a large number of stings "when things get out of hand."

He says up to one-third of hospital emergency room visits can be attributed to those insects, when there’s a rash of them getting riled up. It’s an aggressive wasp, and if provoked, can sting repeatedly and painfully.

He says there have been some very bad years where wide incidents of wasp stings "get out of hand" during August but there haven’t been any reports in four or five years.

Pellitteri says it makes you wonder if something isn’t keeping the yellow jacket populations lower. With all the flooding Iowa had this year, he says it’s possible the wet weather we a negative impact on the wasps earlier in the spring or summer.

"When we start to see this repeated pattern, we are suspicious indeed there might be something more going on, they might have some parasites or diseases that are keeping their numbers down," Pellitteri says. The wasps have "only been in the state for about three decades and sometimes you do see some changes in populations."

A German yellow jacket was first spotted in the U.S. in 1975 in Ohio and is now the dominant species over the Eastern yellow jacket all across the Midwest.