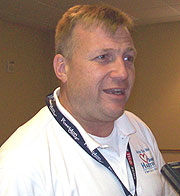 The Republican candidate in Iowa’s first congressional district says he’s not alone in finding it difficult to raise money for his race. State Senator David Hartsuch, a Republican from Bettendorf, is facing Democratic Congressman Bruce Braley of Waterloo in November.

This morning, Hartsuch told Iowans who’re at the Republican National Convention in St. Paul that it’s been hard to talk traditional Republican donors into giving to his campaign.

"The real question is: Can Republicans win? That’s the big question. A lot of the Republican donors, they don’t want to give to a candidate that they don’t think can win," Hartsuch says. "Democrats have been touting the rise in (voter) registration as an example and saying, ‘See, all these people are out there. They’re going to be voting (for) the Democrat.’ I would contend that the rise in voter registrations is due to having a more aggressive (Democratic) party going out and seeking that registration and that is not necessarily going to translate into votes." According to the latest data, there are about 35,000 more registered Democrats in Iowa than Republicans in the first congressional district. Just since January, Democrats have registered an additional 14,000 voters for their party in the first district, while the number of Republican registrations has remained about that same.

The first district congressional seat was won by Democrat Braley in 2006. Democrats hold a majority of seats in congress and Hartsuch says that means it’s harder to raise money as a Republican candidate for congress. "We going to have to have a party that is going to work more efficiently with regard to campaigning," Hartsuch says. "The days of having the special interest money flowing into the Republicans are over. That money is now flowing to the Democrats."

Hartsuch isn’t alone as he says Republican Christopher Reed, the candidate running against long-time Democratic Senator Tom Harkin, is running on a shoe-sting budget, too, and doesn’t have more than 3000 brochures to hand out to voters.

Lots of Republican candidates in Iowa who are in the same boat, according to Hartsuch. "The party itself is broke. The party doesn’t have money. I was looking at the fundraising of the Republican Party of Iowa versus the Democrats and you’ll see that it’s a good five- or six-to-one spread in fundraising at the party level. I don’t blame our party for not supporting me or any other (candidate)," Hartsuch says. "The truth of the matter is the money isn’t there. We just have to get used to that. We’re got to purify our message and move on."

According to reports filed just over a month ago with the Federal Election Commission, Hartsuch had raised just under $17,000 for his congressional race. Congressman Braley had raised almost $780,000. That’s about 45 times as much as Hartsuch.

Hartsuch has some long-term ideas for turning the G.O.P around. "We have to reestablish our base and define what we are as a Republican Party," Hartsuch says. "A lot of Republican donors don’t even know what we stand for as a party."

Hartsuch, an E.R. doctor in the Quad Cities, was elected to the state senate in 2006.