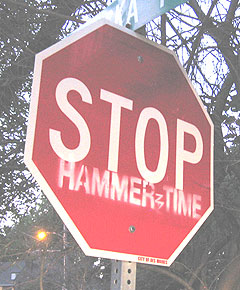 Graffiti on traffic signs is nothing new, but police in Des Moines are dealing with a rash of spray painted messages that apparently pay tribute to rapper M.C. Hammer.

His signature hit from 1990, “U Can’t Touch This,” is making a comeback…on stop signs.

“We take all (graffiti) cases seriously, but obviously the ones that have some gang implications are going to be taken a little bit more seriously,” Valdez said. “We’re seeing these things like ‘stop war’ or ‘stop (hammer time)’ on signs…it’s probably just kids goofing around.”

He says Iowans who spot any type of graffiti should report it to police. “If nobody calls, it’ll just sit there for the artist to admire as long as they can,” Valdez said. Officers in Des Moines have been busy with red paint – trying to keep up with artists who apparently admire MC Hammer.