Early this morning, John McCain’s elderly mother visited with the Iowans who are attending the Republican National Convention in the Twin Cities. 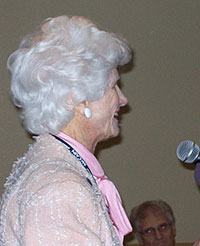 The very spry Roberta McCain climbed up a step, stood behind a lectern, and spoke for about two minutes, without notes. She is 96 years old.

"Listen, I’m no speaker, so bear with me, but one of the many reasons that I’m here is because my husband was born in Council Bluffs, Iowa," Mrs. McCain said. "He was always so proud that he was from Iowa and he could tell many reasons why it was such a wonderful state and that’s one of the thousands of reasons why I’m so glad to be with you all."

Mrs. McCain was born in Texas. Her husband, John McCain, Senior, died 27 years ago. He was an admiral in the Navy and their son, the G.O.P presidential candidate, followed him into the service. Retired Colonol Bud Day of Sioux City was a prisoner of war in Vietnam with McCain and Day – who is 83 years old — spoke to Iowans after Mrs. McCain.

"About 18 months ago John McCain was flat on his back. He was out of money He was written off as being a non-candidate. It looked as if things were really bad," Day said. "But the beautiful part of John McCain is he is always looking up and he can get up and fight again…He got up and fought again and won."

Mrs. McCain also noted her son’s rise from the ashes as she thanked McCain supporters. "Another of the 10,000 reasons I have to be here is to thank you all — all of the time and the money and the love that you all have given to make this a successful campaign and to get us where we are today, overlooking the fact that a year ago, these people were so condescending and now, they’re really toting up to him a little bit, have you noticed?" Mrs. McCain said, to applause from the crowd.

Day urged the Iowa delegates to bend the ears of younger voters who he believes are too easily swayed by the speeches of Democratic presidential candidate Barack Obama. "These kids don’t know what’s going on in the world, you know, the reason that you are here and I’m here is because over these years and the reason that John’s out here as our leader is because we’ve acquired a bunch of information as we grew up. We’ve known what to do. We’ve learned a lot of lessons and these kids don’t know that yet," Day said. "…You know there’ve been a lot of real spell-binder talkers out there in our history and not all of ’em been good."

You can listen to the speeches Bud Day and Roberta McCain delivered this morning by clicking on the audio links below.

McCain, as you may know, is a U.S. senator from Arizona. That state’s other senator, Jon Kyl, is an Iowa native who visited the Iowa delegation this morning, too. Kyl graduated from Bloomfield High School and in 1958, he was elected governor of American Legion Boy’s State, a statewide honorary meeting of high school seniors. "I still have a sister in Des Moines and always enjoy getting back to Iowa and by the way, I thought I was getting back to Iowa after the travel from St. Paul this morning," Kyl said of his trip from St. Paul to the Iowa delegation’s hotel in Bloomington, Minnesota. "You all drew the short straw getting the hotel." The convention proceedings are being held in the Xcel Energy Center in St. Paul, which is 15 miles away from the Iowa delegation’s hotel.

The McCain campaign arranged for a series of speakers this morning for Iowa Republicans in the Twin Cities. Charlie Black, a senior advisor to the McCain campaign, was among them. "You all know better than me how close Iowa’s been in recent years in the general election. I’ve looked at a few polls and talked to a number of you out there to sort of gauge what it looks like for this time. Let me tell you, it’s going to be close again," Black said. "You are a classic swing state. It’s going to be close."